Film / Angels in the Outfield 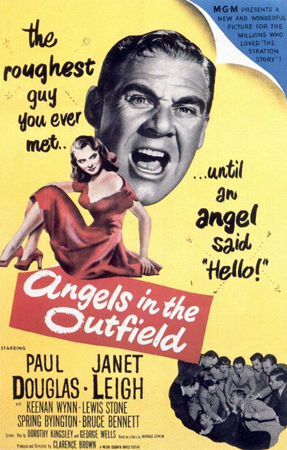 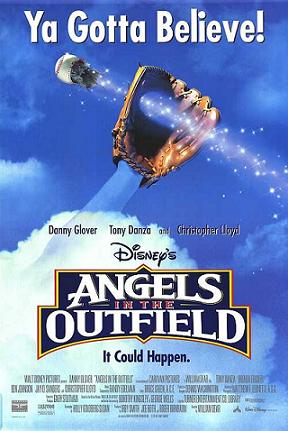 "Even though you can't see us, we're always watching."
— Al the Boss Angel, 1994 remake
Advertisement:

The 1951 film was directed by Clarence Brown and stars Paul Douglas and Janet Leigh. It's about Pittsburgh Pirates manager Duffy McGovern (Douglas) being visited by invisible angels who will give his team miracles, as long as he stops swearing and controls his violent temper. A girl from the local Catholic orphanage can see the angels, and a woman reporter, Jennifer Paige (Leigh) who's been covering the Pirates prints the story. McGovern's bête noire is Fred Bayles (Keenan Wynn), a snarky sportscaster who wants to get something on him. When the manager is beaned by a fastball he lets slip about "talking to angels", and a sanity hearing ensues. Meanwhile, the angels let McGovern know that his veteran pitcher Saul Hellman (Bruce Bennett) is about to be "signed up" in Heaven, and McGovern resolves to give Hellman one more turn on the mound. Naturally, the Pirates eventually take the NL pennant, and the reporter and McGovern ultimately get together and adopt the little girl.

The 1994 Disney remake, directed by William Dear and starring Danny Glover, Tony Danza, Joseph Gordon-Levitt and Christopher Lloyd, is about a boy praying that the California Angels will win the pennant, mistakenly believing that if they do, he will reunite with his Disappeared Dad. Roger Bomman (Gordon-Levitt), currently in foster care, had asked his dad when they will be a family again, to which his father replied sarcastically, "I'd say when the Angels win the pennant." Taking his father's words to heart, Roger prays for God to help the hapless, last-place Angels win. After he prays, a star unseen by Roger twinkles in the sky. Then, in a game attended by Roger and his foster brother JP, Roger sees a group of angels led by boss angel Al (Lloyd) helping the team. Although Roger can see the angels quite clearly, everyone else can only explain the seemingly impossible acts as freak occurrences. Roger's unique ability to see which players are receiving help from angels leads the Angel's skeptical manager, George Knox (Glover) to keep Roger around as a good luck charm/consultant. Due to the much needed help, the Angels start to win games and make a surprising second-half surge to the top of their division, led by the angel-aided resurgence of washed-up pitcher Mel Clark (Danza).

Both versions are standard kids' movies — the original has appeal to adults as well — but feel-good ones ultimately about the power of faith wrapped around a sports story. The 1994 version was followed by two Made For TV sequels, 1997's Angels in the Endzone (Same thing as Outfield, but with high school football, and replacing the orphan/foster child plot with two boys coming to terms with their father's sudden death) and 2000's Angels in the Infield which replaced Christopher Lloyd with David Alan Grier as the head angel.

Angels in the Outfield provides examples of:

Angels in the Outfield

Roger's deadbeat dad walks out of the courtroom... and out of his life.

Example of:
I Have No Son!

Angels in the Outfield

Roger's deadbeat dad walks out of the courtroom... and out of his life.