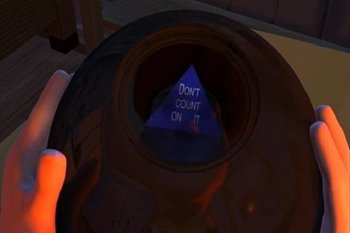 A Magic 8-Ball is, in general, any tool that is used in order to gain advice or try to predict the future. It must be a prop or other physical object, since any characters would fall under Mentors or some other advice dispenser instead. It must be able to accept questions, and respond in turn.

In reality, a magic 8 ball is a classic toy consisting of a hollow plastic sphere containing blue liquid and a 20-sided die with different phrases printed on the sides. You would ask it a question, then flip it over and a random response would come up in the window built into it. As a result, there are various uses of the possible responses involved, as well as of the 8 ball itself. The details and phrases involved can be found on