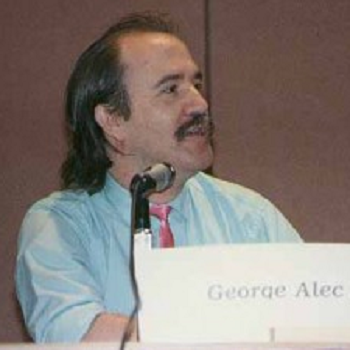 George Alec Effinger (1947-2002) was an American Science Fiction writer who lived in New Orleans, a city that influenced his work, especially his best-known work, the Marîd Audran series (starting with When Gravity Fails), which featured New Orleans' famous French Quarter transplanted to a futuristic Middle-East and renamed "the Budayeen".
Advertisement:

His first published novel, What Entropy Means to Me, was nominated for a Nebula Award. He went on to write a wide variety of SF, from the comic fantasy Maureen Birnbaum, Barbarian Swordsperson stories to the dark The Wolves of Memory (a novel based on his personal, long-running battle with ill health). He wrote an entire collection of short-stories about the future of sports, called Idle Pleasures, and The Zork Chonicles, a novel based on the early video-game, Zork. He collaborated with Jack Chalker and Mike Resnick on The Red Tape War, and his novelette "Schroedinger's Kitten" won the Hugo, Nebula, and Seiun Awards.