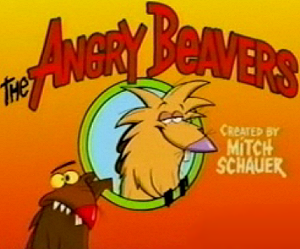 An animated show about two beavers, Norbert and Daggett, who are brothers and share a home. Norb is actually relatively easy-going (or was early on), and Daggett is the angry one. Hilarity Ensues between the two regularly, often in a highly absurd way, crammed full of dialogue both fantastically witty and ridiculously dim.

Part of Nickelodeon's Nicktoons franchise, the show first began airing in 1997 and ran for four seasons. In 2001, it was canceled for good when the last episode to be produced had the characters aware of the fact that they were in a cartoon which was about to end. This apparently broke several in-house rules, namely not breaking the fourth wall (even though KaBlam! did this in, like, every episode) or announcing the end of a series (due to Nickelodeon's habit of profiting off re-runs). It also apparently got the executives angry by referring to an earlier incident where the line "Shut up" was censored for a re-run using the Sound-Effect Bleep and then changed altogether when that generated even more controversy.

However, the show was able to be released through iTunes, featuring the best of Seasons 1 and 2. Seasons 1, 2 and 3 have been placed on DVD. The complete series was released on July 30th, 2013

Perhaps the only cartoon in the universe in which a clock on the wall visible in most episodes updates in real time.

Not related to Angry Birds.