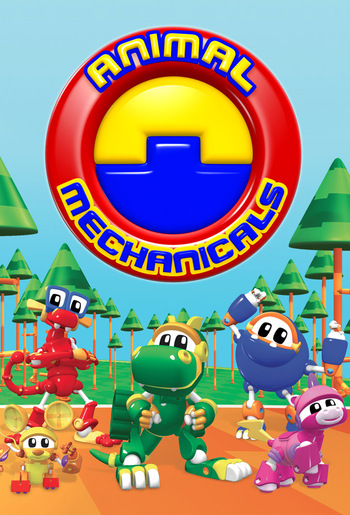 Mechana can we do it? We animal mechanical can!note Left to right: Mouse, Komodo, Rex, Sasquatch, Unicorn
Advertisement:

A Canadian All-CGI Cartoon for preschoolers produced by Halifax Film Corporation (now part of WildBrain) for CBC Kids, Animal Mechanicals presents us to a place like no other, a "snap-together-take-apart" world where everything transforms.

In this world, the Animal Mechanicals - Rex, Unicorn, Komodo, Mouse, and Sasquatch - are faced each day with a new mission from Island Owl, and are sent to help the inhabitants of their world. Each adventure has a variety of small challenges to overcome on the road to "Mission Accomplished". The challenges vary requiring the Animal Mechanicals to use their wide array of unique transforming "Mechana" abilities to finish the job.

The show ran from September 3, 2007 to November 29, 2011 with 3 seasons and 74 episodes. Incidentally, its run almost perfectly coincided with that of Bo on the Go!, another Halifax Film Corporation All-CGI Cartoon airing on CBC Kids at the time.

In 2019, the series was revived through the release of new nonverbal web-shorts produced by WildBrain Spark Studios, a subsidiary of WildBrain that produces original content for the WildBrain Spark network.

No, this has nothing to do with Mechanical Animals. Thankfully.

"Here we are! Mechana Trope Island!"

Sure, it's niche, but it's a pretty cool superpower.

Sure, it's niche, but it's a pretty cool superpower.