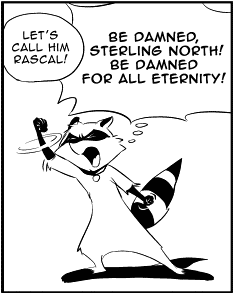 "If there must be a cat, do not, for the love of God, name it: Magnifi-cat or similar pun; Mr. Adjective-Anatomical-feature; with two or more words all starting with the same letter; or with any name plus the surname of the cat's owner."
— How NOT to Write a Novel
Advertisement:

Sometimes it's just not worth making up original names for animals. These are names that have been used forever in real life for (usually domesticated) animals, and carry over well for animal characters in fiction. Sometimes its an obvious pun or description of the animal's appearance. Sometimes, the stock names are a more colorful way of referring to the animal's species: If you say "Fido," the reader will instantly understand that you're making an allusion to dogs in general, with no further context necessary.

The bottom line is, if you want an original name for a character, don't use these ones. Note that in Real Life, these names are very much a Dead Horse Trope; they'll only generally be used by small children (probably because they saw it on TV) or people who don't care one way or another about their pet having a cliché name. They certainly no longer show up in the lists of most popular pet names. But, if you use the names correctly, people know immediately what kind of all you mean.

Since this is pretty much a Universal Trope, don't bother listing specific examples. But if you know of an interesting subversion, it's probably worth adding.