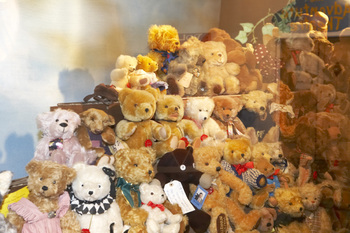 A bunch of teddy bears sitting together
A teddy bear is a stuffed toy animal in the shape of a bear. Among toy animals, bears are especially common and popular. Plush bears are the subject of entire toy lines, and the specialty in some toy shops.
Advertisement:

Teddy bears are Older Than Television; their name comes from Theodore "Teddy" Roosevelt, who once refused to shoot a black bear during a bear hunt in Louisiana. So, a teddy bear is a cute thing whom one would not want to kill, and the Steiff bear was patented in 1905. The label "teddy bear" now refers to almost any plush bear.

Teddy bears almost always are Beary Friendly and avert Bears Are Bad News. Teddy bears are not fierce; they like to give hugs! (Although they may sometimes be shown in children's media as bravely protecting their owners from Things That Go "Bump" in the Night.) Teddy bears rarely act like bears (unless they want to eat honey), they are just generic animals who happen to be bears because they are furry and not human. Teddy bears are anthropomorphic and usually fit the Funny Animal trope; they do not look human, but they have two arms and two legs (whereas real bears have four legs), and walk on two feet, though they are often posed sitting. Teddy bears have eyes, nose and mouth almost like a human, but also a short snout (usually more like a puppy than a bear) and bear-like ears on top of their head. On the bear's behind, there might be a small tail. Teddy bears have fur; usually brown, as a generic bear color, but they can be any color at all. Some bears have a small amount of hair (of whatever color) between their ears. Some bears wear a shirt.