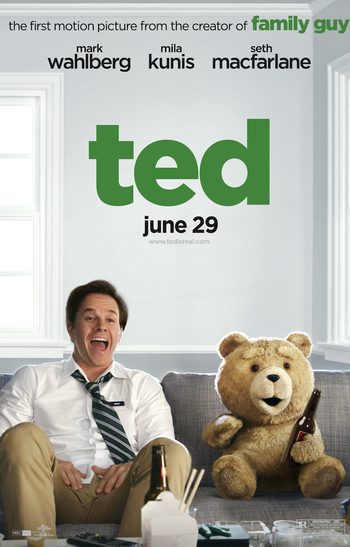 Ted is a 2012 comedy film directed, co-written and co-produced by Seth MacFarlane and stars himself (well, his voice), Mark Wahlberg and Mila Kunis, and is MacFarlane's directorial debut. It focuses on John Bennett, a little boy who receives a teddy bear as a gift and wishes for him to come to life. As luck would have it, his wish is granted on a falling star, and the bear, aptly named Ted, does in fact gain sentience and grows up alongside John as his best friend. 27 years later, they're still together as roommates and still somewhat on the immature slacker side. This is a problem for John's girlfriend Lori Collins (Kunis), who feels that Ted is a poor influence on John, while Ted feels she's going to come between their friendship...

He's right, of course. That's what women do in these romantic comedies with foul-mouthed wastrel teddy bears.

Tropes contained in the film include: