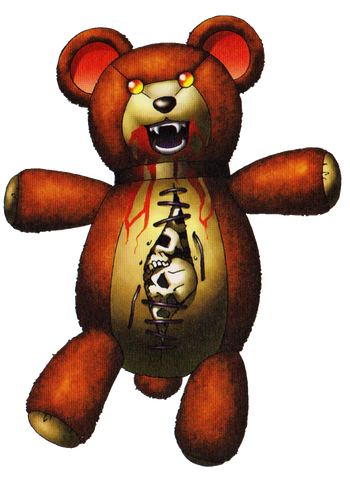 Could I get a hug?
"SCP-1048-C - Subject resembles a teddy bear similar to SCP-1048, but composed entirely of rusted metal scraps. Subject was first sighted on ██/██/████ by Dr. Carver in his office while writing up a report on the SCP-1048-B incident. Subject fled the room when it noticed Dr. Carver observing it. In the attempted pursuit of SCP-1048-C, Dr. Carver witnessed the death and maiming of █ Foundation personnel as the subject exhibited extreme violence during its escape."
— SCP-1048

A random teddy bear, or any other cute and (formerly) innocent Living Toy plush animal, from your childhood, just earned a place in your worst nightmares by killing/being used to kill people. Sometimes caused by a Sealed Evil in a Teddy Bear.

Related to Creepy Doll and Cute Is Evil. Sister Trope to Perverse Puppet and Demonic Dummy. Not always a case of Fluffy the Terrible. See also: Bears Are Bad News, even if the plush is not always a bear.