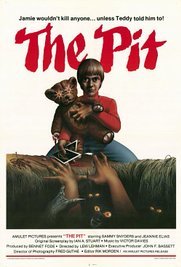 Jamie wouldn't kill anyone... unless Teddy told him to!
"The Pit is the most bizarre contemporary reimagining of Dennis The Menace I've ever seen."
— Jay Bauman, Best of the Worst
Advertisement:

The Pit is a 1981 Canadian Horror comedy film.

Jamie Benjamin is a 12-year-old outcast. One day, while playing in the woods, he discovers a pit filled with monsters. He befriends the monsters, whom he calls "tro-lo-logs," and decides to feed them his tormentors.