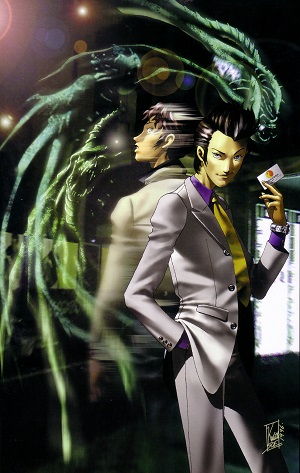 Their lives aren't the same anymore in Hirasaki City.
Advertisement:

Shin Megami Tensei: Devil Summoner is a turn-based RPG originally released for the Sega Saturn on December 20, 1995, and the first game in the Devil Summoner sub-series. In fact, it was the first game from the entire Megami Tensei franchise to be released for the Saturn, and it has been re-released several times since then, with the first being for the Playstation Portable on December 20, 2005, and the latest one being for the Japanese-based Playstation Network in 2010. A live-action TV adaptation was aired in Japan in the early 2000s with 25 episodes, being initially based loosely on the game, but diverging halfway through with some original stuff thrown in that makes it a bit different from the original source in the second season.

The story of Devil Summoner takes place in Hirasaki City in the mid-1990s. You play a normal university student who's living out an ordinary life in the city... That is until he gets reports on the local news that there are witnesses who had reported to the police about sightings of mysterious demons prowling around the city. The city's police force are also in trouble since they are now investigating cases that cannot be solved since the only perpetrators responsible for them are not human. But never mind that now. The student's girlfriend, Kumiko Hatano, informs him that she needs to borrow a book written by Professor Azuma at the city's library in order to read up on his studies regarding the dark past of Japan prior to the 20th Century. After doing a few errands, the students is ambushed by demons and is saved by anti-demon detective Kyouji Kuzunoha and his partner, Rei Reiho.

Despite this event, Kyouji is assassinated under unknown circumstances. Later on, the student is also hunted down and assassinated by a man named Sid Davis, who wants the book Kumiko has borrowed from the library. While his soul was supposed to be transported through the River Styx, Charon informs him that he needs to get back to the real world. Thus, the adventure begins when the student's soul gets planted into Kyouji's body. Together with Rei, they work together to hunt down Sid and eliminate the demons prowling in the city. Along the way, Kumiko gets kidnapped thanks to Sid, and the duo later learns that the city has a dark past tying back to the early history of Japan which explains why Kumiko was abducted to begin with.

Like in the mainstream Shin Megami Tensei games, the core mechanic of recruiting and using demons to fight alongside the player is retained. This involves giving appropriate answers or handing out money and macca to any kind of demon before it joins your ranks. Sometimes it doesn't work due to either their personality or due to the presence of a full moon. Quests are given by the various residents of Hirasaki City due to Kyouji's reputation as an anti-demon detective; most of them advance the story, while some allow the player and the demons to earn experience, money and macca. Demon fusion is also retained, allowing the players to create any kind of demon with specific strengths/weaknesses and skills.

As of 2021, there's an attempt to get the game an English fan translation