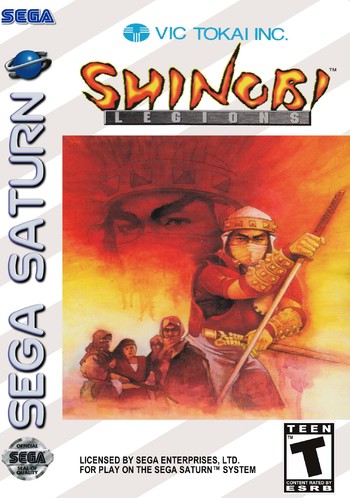 The way of the ninja is to become the shadow leading the world to peace and justice.
"Consumed with hatred and the desire for supreme power, Kazuma now leads "Garzo", a group of evil and darkness. Sho stands as an obstacle, however, and Kazuma has abducted their sister Aya to drain her powers and keep Sho from interfering.

Sho must now rescue his sister while crushing his brother's plans for domination in the ultimate fight for survival!!"
— Page 4 of the American Manual.
Advertisement:

A Shinobi video game for the Sega Saturn that chronicles the adventure of a young ninja named Sho, who seeks to rescue his young sister Aya from their evil older brother Kazuma and his group known as "Garzo". It has three different title names, known as Shinobi Legions in North America, Shinobi X in Europe, and Shin Shinobi Den in Japan.