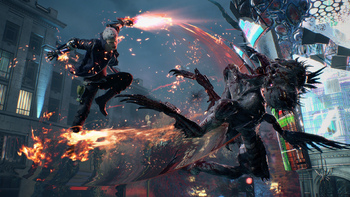 You, too, can do this, any time you want — so long as you know what you're doing.
"This is simply the benefit of training!"
— Rosa from Bayonetta 2, spoken only when the player achieves a Pure Platinum combat grade
Advertisement:

For some action heroes, it's not enough to just save the world; they've gotta look good doin' it.

Stylish Action is a sub-genre of action video games that involves unrealistic combat and the fun that comes from learning how to create it. Its main point is to use a deep set of mechanics to be stylish, rather than the style coming from the animations themselves. In short, the style is because you, the player, are earning stylish combat through developing your skills, not just the character through what they're programmed to do.

Unlike most action games, stylish action is just a particular way of engaging players in combat, so it's crossed over with a few established genres including Beat 'em Up, Hack and Slash, and Third-Person Shooter. Since its mechanics give players a relatively large amount of freedom over how their battles go, the genre is basically the Wide-Open Sandbox of action games.

Three elements are the backbone of this genre:

If this sounds like stylish action games try to replicate the feel of arcade games, you're absolutely right — Hideki Kamiya (who directed the Trope Codifier Devil May Cry and its Spiritual Successor Bayonetta) stated that his inspiration for the game's combat came from his days of playing at arcades and finding the ability to make a cool move because he knew people were watching.

Some of the genre's alternate names are character action, technical action, cuhrayzee games, spectacle fighters, deep action, arcade action, combo action and extreme action. There are some, however, that don't like this label, and prefer to simply call them action games.

Compare and contrast with two other subgenres: musou, which pit the player against entire armies of individually-harmless enemies, and the Souls-like RPG, which refers to games (notably those of FromSoftware's output like Demon's Souls, Dark Souls and Bloodborne) that greatly prefer "teaching through difficulty" over combat depth or scoring systems.

These are the games are universally pointed towards as being part of the "stylish action" genre, and are the ones that established the many conventions that the rest of the genre follows. These games are generally made by Capcom' Clover Studios and their successor PlatinumGames, Koei Tecmo's Team Ninja, and Grasshopper Manufacture. This is not an indictment on the quality of these games or the games not mentioned, just a list of the ones most universally-agreed upon to be "stylish action" games:

Other examples of the genre

These are titles that feature some elements of the stylish action genre, but for one reason or another, aren't considered to be the archetypal titles in vein of the aforementioned games and are less agreed-upon as being part of the genre in comparison to the genre-defining titles. Again, these games being listed here is not an indictment on their quality - they're just more contested when it comes to classification as a "stylish action" game.