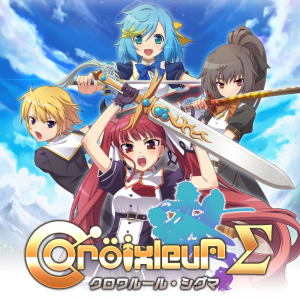 Illance, it is a land ruled by a wise and brave Queen where two factions, the Aristocrats and the Knights, have vied for power for generations. Tonight is the fateful night where Lucrezia Viscounti, the top student of the Aristocrat's Besier academy and the protagonist of this story, will undergo through the ritual of "the Adjuvant Trial". It is a ritual held since the founding of the country that will decide which faction will hold military and political authority, as well as protecting the Queen. Of course, she will not undergo this trial alone; representing the Knights is top student of the Scelta academy and her former friend, Francesca Stralo.
Advertisement:

Cröixleur is an arcade-styled Hack and Slash game by the doujin circle of souvenir circ. where you will test your strength against waves upon waves of enemies. The gameplay is very reminiscent to the Bloody Palace found in the later entries of the Devil May Cry series as you must slay your enemies quickly as possible and take various routes to fight the next set of enemies. Lucrezia can take with her to four different swords before each game, each with their own strengths and unique special attacks to help her chain effective combos. There's also a Score Attack mode to test how much points you can rack up in three minutes, and an Endless Mode where you fight an endless wave of enemies 'til you drop.

Originally released in Japan for Windows PC during Comiket 78, Cröixleur was later released overseas by Nyu Media on January 24th, 2013 on DESURA and GamersGate. The English release also features new HD filters and widescreen support, in-game Achievements, and personal rankings. After being greenlit

on Steam, an Updated Re-release titled Cröixleur Sigma was released on April 30th, 2014. Sigma includes new features not seen in the original such as Steam-integrated features (Steam Achievements, online leaderboards, trading cards, etc.), a new story, new weapons, extra game modes, fully-voiced cut-scenes, and the ability to play as Francesca; this version was also brought to DESURA without the Steam-integrated features. The overseas PC release however was delisted for a time from digital distribution on June 1, 2019.

An enhanced port was later released on PlayStation 4 and Play Station Vita in 2016, and the Nintendo Switch in 2019, this time published by Active Gaming Media. This version features even more extra content, such as two more characters (Katerina, the sister of the Queen, and Sara-Annika, a foreign exchange student) in an alternate story that sees them investigating a recent surge in monster attacks, customization options, new game modes, gameplay adjustments, alternate outfits, and the option to chat with the characters in the game in VR* (only for the Japanese PlayStation 4 version). This version was later ported back to PC via Steam and the PLAYISM Store as Cröixleur Sigma - Deluxe Edition on November 20th, 2019, effectively replacing the previous version of Sigma and the original.