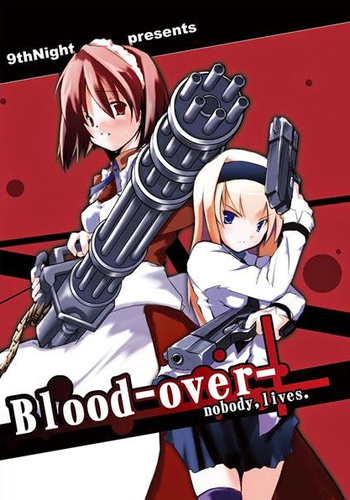 Blood-over- nobody, lives. is a 2006 2D Stylish Action game from the defunct doujin circle of 9thNight.
Advertisement:

Players take control of a gun-wielding demon hunter named Shou along with her house maid, the Gatling gun-toting Akari, as they fight off various monsters, undead creatures, and other supernatural forces when demonic forces break loose on one fateful night. The duo eventually run into a female grim reaper who overpowers Shou in battle and steals her soul, leading Shou and Akari to track her down to not only reclaim her soul, but find answers behind the outbreak and Shou's mysterious ability to steal souls of slain monsters. They are not the only ones hunting demons, as they also cross paths with the demon-hunting group known as the Undertakers.

Gameplay in Blood-over- is simple at a glance but far from a cakewalk; Shou has a simple Gun Fu attack with the Fire button and kicks with the Kick button, but certain directional combinations can be used to allow her to perform other attacks such a powerful explosive shot, a gun launcher attack, somersault kicks, and slides. Each successful attack you land on your enemies builds up Blood Points for your Blood Meter, which can be used for a devastating multi-gun shot attack at point blank range or call for Akari's assistance where she'll mow down her enemies with her Gatling gun. The crux of the gameplay, however, revolves around the Overkill System, which encourages players to dispatch enemies not just by simply killing them, but to overkill them and squeeze as much extra Blood Points as they're worth. This also ties into the game's dynamic difficulty system, which scales as the player earns higher scores. The game also features multiple endings; which one the player receives, however, is based on their performance.

Not to be confused with the 1996 Survival Horror game Over Blood.