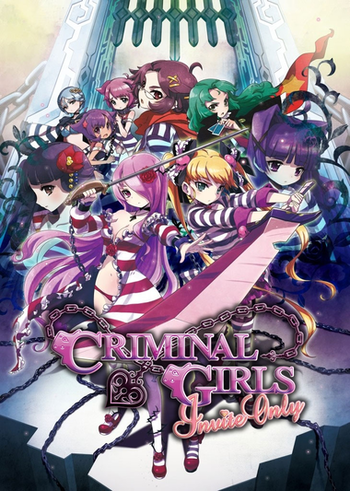 Criminal Girls is a turn-based, dungeon crawling JRPG developed by Imageepoch and published by Nippon Ichi. Initially released for the PlayStation Portable in 2010, an Updated Re-release for the Playstation Vita titled Criminal Girls: Invite Only was published in 2012, and was the only version ported to the west in 2015.
Advertisement:

The plot focuses on an unnamed main character called to lead a group of delinquent girls through Hell in order to overcome Four Trials that will cleanse them of their sins and allow them to return to life redeemed. Unfortunately, the girls do not want to fight and have to be properly "motivated" into action.

The project immediately begins to have things go wrong as several girls escape, numerous convicts begin wandering around, and all means of communication with Hell's operating committee are cut off. The main character and the girls can only continue their ascent while trying to figure out what is going on.

The sequel, Criminal Girls 2: Party Favors, was released in the US in October 2016.