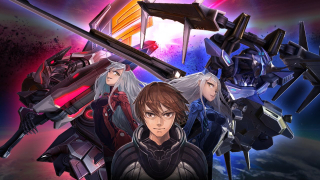 "ROLL OUT!"
— Caption for the debut poster
Advertisement:

Astebreed is Edelweiss' Spiritual Successor to Ether Vapor and Shoot 'Em Up doujin game that, like its spiritual predecessor, uses angle-changing gameplay. Now you fight beyond vertical, side, or frontal shooters and more angle changes than before. The style has considerably changed, more akin to Zone of the Enders.

Humans are at war with a mechanical Horde of Alien Locusts known as the Filune, which wreak havoc on entire worlds. On one distant world, Grato Nono engages with the alien forces, losing his squadmates and eventually his own mecha. One of Grato's daughters, Fiona Nono, comes to save him in a mysterious legless mecha and quickly performs a Hyperspeed Escape, where they are picked up by a Federation-like fleet. A long period later, Fiona is partnered with young pilot Roy Beckett to launch an offensive against the Filune, using the mecha Fiona saved her father in, now with a new pair of human-built legs. But allying with the hostiles is Estina Nono, Fiona's psychotic sister with a rivaling mecha.

, or the Humble Store

. A trailer of the game can be viewed here

, and gameplay of the first stage can also be viewed here

. A PlayStation 4 version was released in Japan on March 19, 2015, and overseas on June 25 for $19.99. A Definitive Edition was later released on November 6, 2017, which backports all of the improvements and new content from the PlayStation 4 version back into the PC version; those with the original version received the Definitive Edition free of charge. On November 8 2018, the enhanced version was brought to the Nintendo Switch.