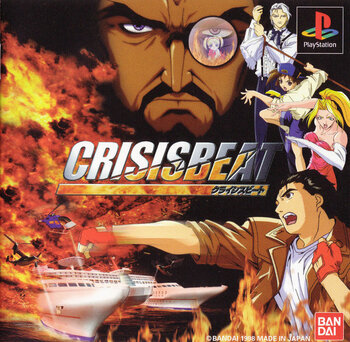 Crisis Beat is a 1998 Beat 'em Up video game developed by Soft Machine and published by Bandai for the PlayStation.

Christmas eve, 1998 — a luxury cruiser named The Princess, en route from Tokyo to New York, has been hijacked by a Western terrorist group led by the renegade military leader, Lieutenant-Colonel Whigen. In the ensuing takeover, four lucky passengers made it out of the chaos:

Needless to say, when push comes to shove, it's up to the four of them to take on the terrorists.

And that's all the plot there is to the game. Cue the ass-kicking and terrorist-punching!