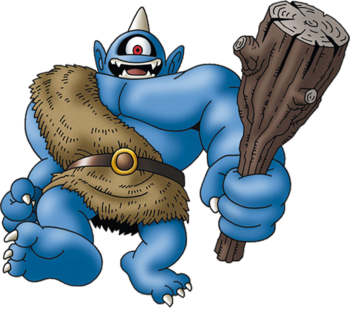 The Smash Mook is the most single-minded enemy in the history of gaming (either Tabletop or Video Games). All it does is direct attacks without any real strategy. You can expect few, if any, fancy tricks when fighting it. It may be a major threat, or a minor one, but they all fight the same way, smashing, smashing, and more smashing.

What sets these apart from most enemies, whether regular enemies, Goddamned Bats, bosses, or a Boss in Mook Clothing, is the lack of variety and reasonable challenge in spite of this — these characters tend to be extremely tough and hit like trucks, so that despite simple and predictable attacks they'll still take a lot of work to bring down. You encounter this enemy, you can expect these traits. Nothing more, nothing less:

These are very common as a Wake-Up Call Boss, as they represent an opportunity for players to learn that fighting the enemy head-on doesn't always work, and in order to counter these mighty brutes, one has to resort to advanced tricks — in essence, they're meant to teach you not to fight like a Smash Mook yourself by being better at it than you. Typical strategies for dealing with them include Hit-and-Run Tactics, bogging the enemy down with Status Effects, exploiting their charges against them or luring them towards environmental hazards. If the Smash Mook fights as a part of a group, it might be a good idea to stay clear of him so you can Shoot the Medic First, then come back for him when he's alone and weakened.

Sometimes, however, the difference is mostly cosmetic: players might face two or three at once, and they are not much tougher than a regular enemy — just enough to be distinct.

In fantasy settings, this role is often assigned to ogres, giants, trolls, cyclopes, and similar large humanoids. It's often fairly rare to see a member of these species as something other than a big, dumb brute with a big stick, and exceptions are often deliberately played up as subversions of what would be expected from them.

Often overlaps with Giant Mook (although even those allow some variety in their attacks) and Damage-Sponge Boss, but is less dangerous than a true Elite Mook. If it ends up being a pushover, then it's a Fake Ultimate Mook. See also Mighty Glacier and Stone Wall, which these characters often are. When one is fast on top of that, it'll often become a Lightning Bruiser. When they use weapons, these will typically also be examples of Primitive Clubs, Savage Spiked Weapons, or both.

This used to be called "The Ogre", but that name was gobbled up by Our Ogres Are Hungrier.

Whomps are giant walking stone blocks that slam down in an attempt to crush Mario, exposing the weak spots on their backs.

Whomps are giant walking stone blocks that slam down in an attempt to crush Mario, exposing the weak spots on their backs.