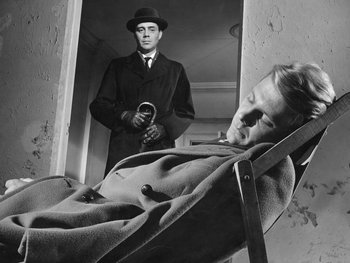 See the balance of power?
Advertisement:

The Servant is a 1963 British film from expat American director Joseph Losey, adapted by screenwriter Harold Pinter from a 1948 novella of the same name by Robin Maugham.

It is a story of Tony (James Fox), a wealthy aristocrat who hires a lowlife servant named Hugo Barrett (Dirk Bogarde, who won a BAFTA for his performance). Initially, Barrett does well at his job, but the relationship shifts as Barrett manipulates and corrupts Tony and dominates the household. Tony attempts a rebellion but in the end, he loses and remains subdued to his manservant for good.

One of the film's main fortes is its gorgeous black-and-white cinematography by Douglas Slocombe. It also touches on the topics of social position versus psychological strength.