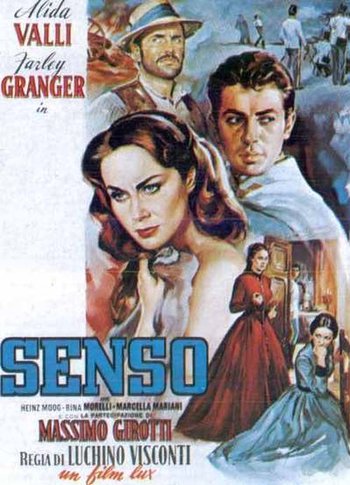 Senso is a 1954 film from Italy directed by Luchino Visconti, based on a short novella by Camillo Boito.

It starts on May 27, 1866, in Venice, at a performance of Il Trovatore. Venice, which has been under Austrian occupation for a half-century, is restive. The Prussians have made agreement with the Venetians to attack Austria, which, among other things, will free Venice to be part of Italy again. War is imminent.

The opera is interrupted by a frenzied demonstration by Italian nationalists. An Italian marquis named Roberto insults Franz Mahler, an Austrian officer in the audience. Roberto's cousin Livia (Alida Valli, The Third Man) tries to intercede, but Roberto gets exiled anyway. Livia is an Italian patriot but she is also stuck in an unhappy marriage with an older boring businessman, Count Serpieri. Soon, despite herself, she is swept into a passionate affair with handsome Franz.

Franz was played by Farley Granger, an American actor better known to Anglophone audiences from the Hitchcock thrillers Rope and Strangers on a Train.