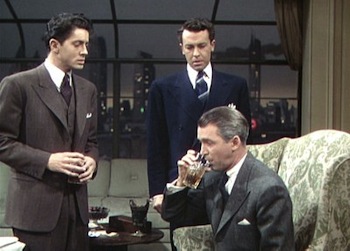 "The good Americans usually die young on the battlefield, don't they? Well, the Davids of this world merely occupy space, which is why he was the perfect victim for the perfect murder. 'Course he, uh, he was a Harvard undergraduate. [snicker] That might make it justifiable homicide."
— Brandon Shaw
Advertisement:

A 1929 stage play by Patrick Hamilton, more famously known as the 1948 Alfred Hitchcock film that was shot in ten takes and cut to look like one.

One spring day, two elite young Manhattanites, Brandon Shaw (John Dall) and Phillip Morgan (Farley Granger), strangle their acquaintance, David Kentley (Dick Hogan), and hide the body away inside a wooden chest at their penthouse apartment. Their reason for doing so is their desire to commit the perfect murder; to see just how perfect it is, they host a dinner party with the chest kept in plain sight as a buffet table. All the guests at the party — including David's father (Cedric Hardwicke); his aunt, Mrs. Atwater (Constance Collier); his fiancé, Janet Walker (Joan Chandler), and the killers' former prep-school teacher, Rupert Cadell (Jimmy Stewart) — grow worried at David's absence. As Brandon continues to push his luck, Phillip shows remorse and Rupert investigates his suspicions. All of which leads to a discovery...

The film is particularly known for its experimental style. Hitchcock abandoned typical shooting and editing methods in favor of long unbroken scenes. Each shot ran continuously for up to ten minutes without interruption. He would go on to use the same technique in Under Capricorn and to a lesser extent Stage Fright (1950). The homosexual subtext was also considered daring for its time. While not a major hit at the time of its release, the film has gained popularity over the following decades. Today, it is often listed among the best of the director.