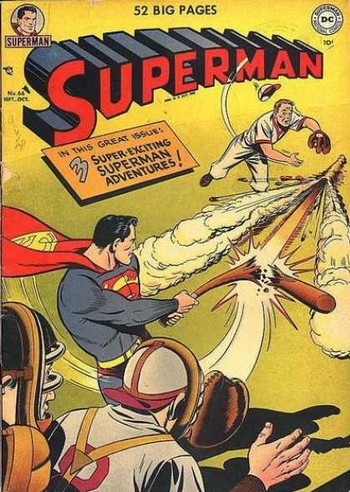 In this trope, characters with superhuman powers and abilities show them off by playing Real Life sports and achieving things that would be impossible in reality, like hitting a baseball into space or running a marathon in under a second.

This trope is often used in Video Games as a way to introduce novelty into them, often in the form of charged, superpowered shots (a la Mario Strikers or Head Sports). This is often a Defied Trope, as many settings with powers bar said powers from sporting events. Alternatively, and often in response to the previous scenario, there'll be a version/league of the sport played only by superhumans.

Sub-Trope of Mundane Utility, and closely related to Improbable Sports Skills. For using superpowers in games of chance, see Paranormal Gambling Advantage. Do not confuse with Boxing Lessons for Superman. See also Smug Super, Go-Karting with Bowser and Too Qualified to Apply.