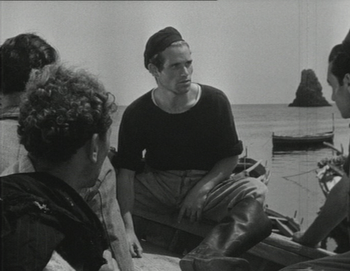 La Terra Trema is a 1948 film from Italy, directed and narrated by Luchino Visconti.

It tells the story of the Valastro family, poor fishermen in Aci Trezza, a village on the western coast of Sicily. (The film is told in the Sicilian language, near-unintelligible to Italian-speakers on the mainland.) All the fishermen of Sicily live on the ragged edge of starvation at all times, performing backbreaking labor out at sea, only to give their catch to greedy wholesalers who pay them a pittance and then sell their fish at great profit in urban Italy.

Ntoni Valastro, a young man who served in World War II and came back full of new ideas, chafes at being exploited by the plutocrat merchants. He hits on an idea: buy a fishing boat for his own family, so the family can sell their catch on the wholesale market themselves. Unfortunately, after a promising start their business venture fails, leading to a series of disasters for the family.

As with many films of the Italian Neorealism movement, filled with an Amateur Cast consisting of real Sicilian fishermen. Later received a Spiritual Successor in Visconti film Rocco and His Brothers, about a similar poor Sicilian family that travels to mainland Italy but struggles to assimilate.