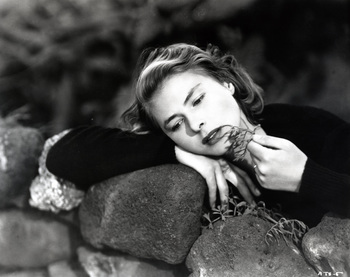 Stromboli is a 1950 film directed by Roberto Rossellini.

Karin (Ingrid Bergman) is a Lithuanian woman who, we eventually learn, got through World War II by sleeping with German officers. The war is over, however, and Karin finds herself locked up in a Displaced Persons camp. Luckily for Karin — or so it seems — she has an admirer in the person of Antonio (Mario Vitale), himself recently released from a POW camp, who has spotted her through the fence. Denied permission to travel to Brazil, Karin settles for second best, escaping the camp by marrying Antonio.

Antonio is from the island of Stromboli

. As Karin finds out to her unpleasant surprise, the island is a barren flyspeck with a volcano that erupts continually. Karin, who has lived a pretty high-class lifestyle for much of her life, instantly hates it. She doesn't care for the locals, mostly crusty old folks — young people have a habit of leaving the boring, isolated, and dangerous island — and, for their part, the old ladies of the town don't much approve of the gorgeous young foreigner who doesn't speak Italian. Karin is rather quickly shunned by the townspeople, and her marriage of convenience grows ever more stressed. Eventually matters reach a point of crisis, as the volcano continues to erupt.

As with many Italian Neorealism films, the cast were all locals except for Bergman and Renzo Cesana, the actor who played the priest. One of the most notorious cases of Romance on the Set, as Bergman left her husband for Rossellini, causing a huge Serious Business scandal in Hollywood.