For Doom the Bell Tolls 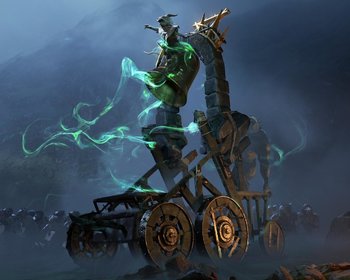 Ring...Ring...Ring
Hear the tolling of the bells
Iron bells!
What a world of solemn thought their monody compels!
In the silence of the night,
How we shiver with affright
At the melancholy menace of their tone!
— Edgar Allan Poe, "The Bells"
Advertisement:

A single, plaintive church bell, given its time to fade away in an appropriately haunting manner. It's a way to add ominous portent to any soundtrack, and it's commonly used to evoke death, or execution, to punctuate a particularly grim turn of events, or just to lay on the creepy atmosphere. In most cases it's a church bell, but some instances simplify it to different kind of bells, sometimes even a simple wind chime. Nonetheless, the meaning remains the same if they ring during a moment of death.

Generally speaking, the bells are a disembodied part of the soundtrack, but occasionally, they are an on-stage article.

Combine this with the Ominous Pipe Organ, Orchestral Bombing, and/or some Ominous Latin Chanting for particularly epic villainy.

The opposite of this trope is Saved by the Church Bell, where bells are used as signs of hope and victory rather than doom and death. If used in-Universe and not as part of the soundtrack, this is a type of Portent of Doom. Compare Ominous Music Box Tune and Xylophones for Walking Bones. Can overlap with Chaos of the Bells. If the bell in question is a weapon, it's a Deadly Ringer.