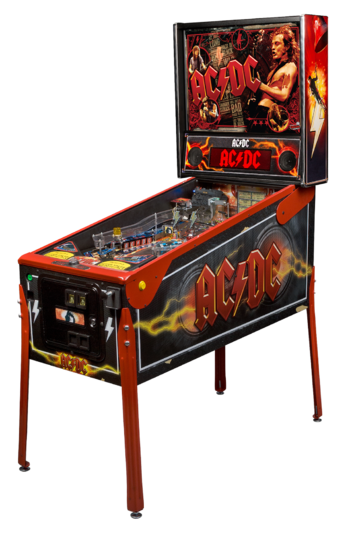 AC/DC is a 2012 pinball game designed by Steve Ritchie, programmed by Lyman F. Sheats, artwork by John Youssi, and released by Stern Pinball. It is based on the legendary Australian rock band AC/DC.

As a celebration of the band's musical legacy, the game tasks players to play through twelve of their most memorable songs, including "Highway to Hell," "Thunderstruck," and "For Those About to Rock". Cycle through the jukebox, fire the rotating Cannon, ring the Hells Bell, then ride the Rock 'n Roll Train. Run through the Jam, Album, and Tour multiballs either individually or simultaneously, make a Request and Change the song, then use your VIP Passes to advance further. Complete all twelve songs, then start the Encore and play them all over again.

As with many other Stern titles, it was initially released in both a standard ("Pro") version and several deluxe versions, with the latter including added features like a small "Underworld" playfield embedded inside the regular one. In December 2013, a "Luci" Premium Edition