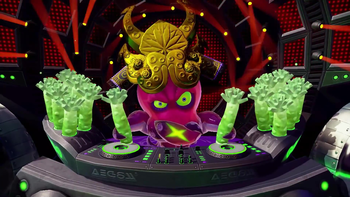 The main characters are in a very bad place. They are surrounded by dozens of mooks, The Ace is down, and they are out of Applied Phlebotinum. Suddenly...

Oh, Crap!... Do you hear that ominous bass drop? There is no more doubt: the Big Bad is coming.

Basically, this is when Electronic Music is associated with the villains. Historically, it comes from several factors. First of all, this trope is the natural evolution of the association of Evil and Rock'n Roll in public consciousness: it's popular (so it's dumb), it's loud and unartistic. In other words it is bad music, so it is logical that it should be associated with bad guys, right? Then, Rock & Roll and all his punk and metallic siblings (the previous musical scapegoats) progressively lost their "rebellious" vibe throughout the years, and the use of this genre for the villains' Leitmotifs mostly appears as a Dead Horse Trope.

In effect, the electro soundtrack gives to the villain an overwhelming aura, while the association of extremely sharp and low noises also gives to its presence an uncanny feeling of disharmony. Because of the rift between the electro fans and haters, the music could at the same time make the bad guy look awesome and badass or an unbearable and tasteless Scrappy, turning the character into a Base-Breaking Character.

Despite the "Evil Electro" name, the trope does not only apply to Hip-Hop inspired electronic music. As a villain theme, the main characteristic is that it must be scary in some way, which is usually done by the aggressiveness of the beats. All Electronic Music does not necessarily work well for a villainous leitmotif:

The trope also has its own little Sub-Trope: the Deadly DJ. After all, what could be more evil than the guy who creates Freaky Electronic Music? This Musical Assassin (who doubles as a Dreadful Musician for some) will often be portrayed as a cocky clubber, flamboyant but lazy (because Electronic Music has the bad reputation of being "easy to make"; the use of samples is often considered a "theft" showing how unimaginative they are) and wasting all their money — that they earned thanks to all the sheeple who bought their crappy music, remember? — in extravagant parties.

It also allows to include Evil Electronic Music in a more diegetic way, wherein the heroes have to use the Power of Rock (ironically enough) in order to defeat the DJ in a Battle of the Bands and prove that "real" music will always win over their engineered and soulless noises. Obviously, their own composition will serve as Battle Theme Music, or it could be a fitting Boss Remix.note Could you believe that they even stole the soundtrack of their own work? Gosh, that's nasty!

Outside of the army of bodyguards and corrupted people in his pocket, the Deadly DJ's favorite weapons usually are the Dubstep Gun

and Sharp Vinyl Discs. A usual representation of the Deadly DJ is an Expy of Daft Punk or deadmau5 and their eccentric helmets, or Lady Gaga and her no-less eccentric outfits and hairstyle for a female variant.

Electronic music is also the theme of most Killer Robots, malevolent AIs and other Mechanical Abominations. When the metallic creature appears and its electronic tune starts playing, it feels like if the distorted noises were coming directly from it, almost like if that amalgamate of codes and circuitry was screaming its rage and its pain at the face of mankind. It would be poetic, if it wasn't simultaneously trying to disintegrate your face with some deadly lasers. Similarly, Industrial is often and fittingly enough the soundtrack of Eternal Engines and Nightmarish Factories, the violent slams of the presses marking the beat.

Visually, it is often represented by distorted Tron Lines, Epileptic Flashing Lights and rainbow-colored volume bars — all of this potentially attacking the target with Hard Light.

Compare Cyber Punk Is Techno when its Black And Grey characters have electronic leitmotifs, Creepy Jazz Music for the Jazz equivalent of this trope, Rotten Rock & Roll for the Rock equivalent of the trope, and Rock Me, Asmodeus! when rock music is associated with the Devil himself. No direct relation with Psycho Electro, though electricity is often an Elemental Power associated with this kind of villains. May overlap with Circus Synths, in Creepy Circus Music.

One final note: if you didn't get it, a lot of this intro is written with Sarcasm Mode on. Of course, Electronic Music is not "soulless", "unartistic" and "evil", everything is a matter of personal taste. Thus, No Real Life Examples, Please! This page has no vocation of listing all the electronic music that you hate, no matter how terrible you think it sounds and how douchey their creators could be.

The Doomsday Device Abraham uses to destroy all of the monsters just so happens to be a sheet of music that, when played, compiles the Kraken to destroy all monsters within sight. Extra points for when Abraham refers to it by name as the "instrument of destruction."

Example of:
Instrument of Murder

The Doomsday Device Abraham uses to destroy all of the monsters just so happens to be a sheet of music that, when played, compiles the Kraken to destroy all monsters within sight. Extra points for when Abraham refers to it by name as the "instrument of destruction."