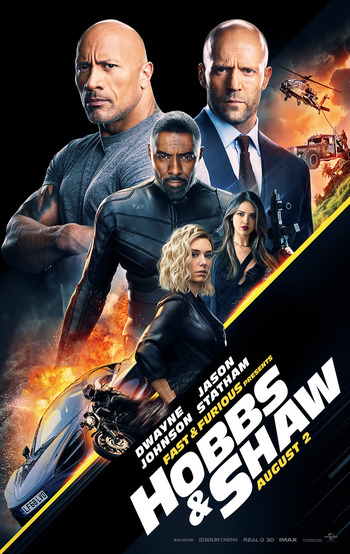 Two worlds collide.
Shaw: It's my sister! Family business.
Hobbs: When it's the fate of the world, it becomes my business.
Advertisement:

Hobbs & Shaw is the first spinoff of the Fast & Furious franchise, with series regulars Dwayne Johnson and Jason Statham reprising their roles as Luke Hobbs and Deckard Shaw, respectively.

After Hattie Shaw (Vanessa Kirby), an MI6 agent and younger sister of Deckard, becomes infected with a super-virus that could wipe out half the world, Hobbs and Shaw are forced to work together to save her life (and the world) from Brixton (Idris Elba), a cyber and genetically enhanced Super Soldier-turned-international terrorist who needs the virus to fulfill his mission.

The film also stars Eiza González as Madame M, an ally of Shaw's, and Eddie Marsan as Professor Andreiko, a Russian scientist who created the virus, while Helen Mirren reprises her role as Magdalene Shaw, the mother of the Shaw siblings. Roman Reigns (the real-life cousin of Johnson) also makes an appearance as one of Hobbs' brothers. The film is also notable for being Lighter and Softer than any of the main Fast and Furious films, due to it's greater focus on comedy when compared to the main Fast and Furious films (as in, the ones that focus on either Dom and/or his crew and all known associates besides Hobbs and Shaw, which are Darker and Edgier by comparison).

A sequel is currently in development.