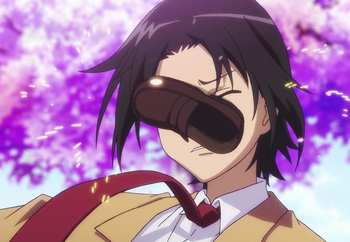 Shooing someone away doesn't work like that.
"That really hurt! I'm gonna have a lump there, you idiot! Who throws a shoe? Honestly! You fight like a woman!"
— Austin Powers
Advertisement:

The shoe is another one of those perfect improvised weapons. Not as Armed Legs, but holding the shoe in hand and whacking stuff with it. It's more likely done if an insect needs to be killed. Alternatively, it can even be thrown.

Obviously this is Truth in Television, throwing shoes happen to be a common occurrence in some cultures and countries, with some seeing it as an act of disrespect; in Spanish households, la chancla is their equivalent of Don't Make Me Take My Belt Off!. Also in general, the soles and the overall construction of footwear can make them quite sturdy. Although their effectiveness is mostly based to what type of shoe and the materials they are made out of. The size also matters depending on whether they can be wielded effectively or work better for being thrown. Boots are a great example of the latter, while slippers/sandals/flip-flops on the other hand are great for the former and latter.

The trope can sometimes cross over with Wearing It All Wrong if someone exploits this trope by shoving their hands into footwear that fit and then using them to kick people inn the face with their fists.

Fa uses her show as a projectile to hit a biker pursuing her.

Fa uses her show as a projectile to hit a biker pursuing her.