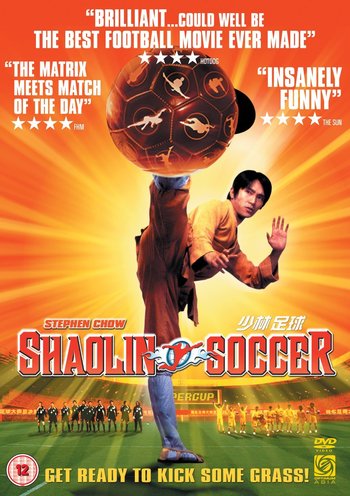 Stephen Chow is About to Kick a Flaming Soccer Ball into Your Face.

As you would expect from the title and director. This movie plays out like a comedy-Wuxia sports movie.

Sing is a young Shaolin master who wants to spread the benefits of kung fu to the modern world — with little success (even on a song-and-dance routine). Then he meets a disgraced and crippled former soccer star, "Golden Leg" Fung, who is now working as an errand boy for Hung, his ex-teammate responsible for the Game-Breaking Injury that cut short his promising career. Initially unimpressed by Sing, Fung soon discovers Sing's unique trait: a kick strong enough to bring down a brick wall and send a beer can flying miles into the air.

Both men reach a consensus to form a football team specializing in shaolin, each with a mutual purpose: Fung seeks revenge upon Hung, while Sing uses the sport as a vessel for his discipline. To this end the latter sets about finding his five brothers, all possessors of unique physical strengths, but have since given up on shaolin and are in similarly disgraced predicaments as Fung. After initially rejecting Sing's pleas, the brothers get together to form Team Shaolin. When it's revealed that Sing and the rest of the team barely knows anything about soccer, Fung just about gives up with them. However, during their first match against Team Rebellion, they develop powers stemming from their Shaolin training, turning the match in their favour. They also proceed to wow the members of Team Rebellion, a gang of bullies led by a member of the mob, with their skills, recruiting them to their cause, along with other teams along the way.

Fung enters the team in the China Super Cup in Hong Kong, where they run into Team Evil, a steroid-fueled team headed by none other than Hung, who is also using his position as chairman of the National Soccer League to rig the tournament in his favor.

Hong Kong superstar Stephen Chow directed the movie and played the main character. The movie became the highest-grossing film in Hong Kong's history in 2001 and won the Best Picture, Best Director and Best Actor awards at the Hong Kong Film Awards. Funny, over the top, slapstick, and filled with amazing CGI effects, it was the first Stephen Chow film that gained the attention of mainstream Western audiences.