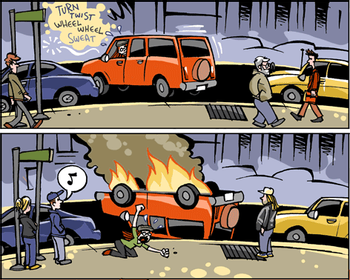 Parallel Parking is one of the most difficult things to do when you're driving. This is something that will get almost anybody nervous, especially during a Driving Test, and would try avoiding. That, or somehow a character can pull off something daring and spectacular

Less skilled drivers will usually bump into the cars in front of and/or behind the spot they're either entering or leaving.