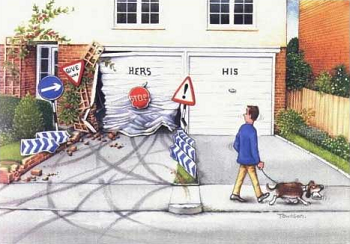 Vance: Most fathers teach their daughters to drive. I have you to blame for this?
Eli David: This she learned from her mother.
— NCIS, "Enemies Foreign", about Ziva
Advertisement:

A (supposedly) long-dead comedy trope/stereotype which maintained that a woman behind the wheel of a car automatically became a danger to life and limb. Regardless of how intelligent and thoughtful a woman was, this trope insisted she would become a Cloudcuckoolander — or worse, The Ditz — the moment she slipped into the driver's seat: incapable of using turn signals, checking her gear shift position, or even looking where she's going. Even parking could become a major challenge.

Any problems — or worse, accidents — she caused would be dismissed with a breezy carefreeness that husbands and traffic cops inevitably found grating, women drivers as often as not blaming the car for operator errors.

Being a male driver on a road anywhere within a half mile of a woman driver was grounds for elevated blood pressure and/or anxiety attacks.

If a male character had a traffic accident or fender-bender in a comedy made before 1970, a woman driver was most likely the cause. And if the mom of a pre-1970 Dom Com got behind the wheel, it was all but guaranteed she'd come home with a crumpled fender and an improbable story that completely exonerated her by shifting the blame to another driver or perhaps a tree which lunged out into the street at her.

Still sometimes used in fiction, often set in the Asian parts of the world and California or Massachusetts; the common joke here is that every time you see a car do something incredibly stupid (as opposed to incredibly dangerous or obnoxious), chances are the driver is a woman. With a high probability of them being Asiannote unless Massachusetts is used. It's also very popular in the comments sections of car accident videos on sites like YouTube.

Statistically speaking, women report more accidents to the police/insurance companies than men do. However, the accidents men report are far more serious — women are more likely to claim for scratching a car on the parking lot, but men are more likely to drive past a red light and into a car at 100 kmph. In locales where insurance companies are allowed to give different premiums for men and women, women's premiums will be less than men's, as the overall cost to the insurance company of covering women is actually lower than the equivalent men.

From the late 1940s to roughly the mid 1960s, women did tend to be poorer drivers than men of the same age simply because they usually learned later in life, from poorer instructors (their husbands, rather than professionals), and until the two-car family became commonplace, had less opportunity to practice, as men made more use of the car. Also, before power steering became standard, driving needed a fair amount of upper-body strength, especially large vehicles. Even during that period, though, this trope was at best a considerable exaggeration of the actuality.

The trope has been somewhat replaced by Drives Like Crazy, in which the driving is the joke, rather than the womanhood. See Directionless Driver for another gender-based driving stereotype.