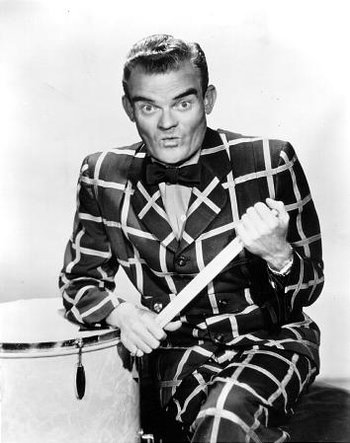 You wanna buy a bunny?
Lindley Armstrong "Spike" Jones (December 14, 1911 – May 1, 1965) was a legendary bandleader in the thirties, forties, and fifties, and one of the first innovators of novelty music in popular culture. Spike was a master of musical comedy - not in terms of the film genre, where one gets a comedy that happens to feature singing, but in comedy created through music. Like "Weird Al" Yankovic, Spike was a parodist, and, again, like Weird Al, having your song mocked by Spike was viewed as a necessity before you could really consider yourself to have made it to musical stardom ... although their approaches were wildly different. Weird Al plays the music so straight that if you're not listening closely, you might not notice that it's a parody; whereas Spike wouldn't change the lyrics, but would take the music out back and mug it. His 1944 hit cover of "Cocktails for Two"

, originally a nice, sweet song about how Prohibition was over and people could have alcohol on dates again, featured gunshots, gargling, slide whistles, and enough violence done to the musical instruments that he may have violated the Geneva Convention.
Advertisement:

Technically, most of his music isn't so much parody as it is travesty (in the technical definition of the word, without the modern connotation of meanness or butchery). He would play the tune with the correct notes and the original lyrics, but in such an out-of-left-field musical style that the music itself was the joke, much like Weird Al's polkas. Parody, by contrast, involves changing the lyrics of an existing song, which is what Weird Al is most famous for. Spike Jones engaged in some parody, but it was in his travesties where his style really soared.

His band, the City Slickers, were a corporate example of Hollywood Tone-Deaf. They were all, Spike included, absolute top-notch players — you had to be to pull off the scripted cacophony of his scores, mastering the split-second timing and making the proceedings funny rather than totally anarchic. Their musicianship is evident on those rare occasions when they played a passage or (even rarer) an entire number "straight." In fact, Spike formed an alternate orchestra in 1946 under the name "Spike Jones and his Other Orchestra" which played seriously in an attempt to show the world he could produce legitimate music, but the public didn't care and it folded shortly thereafter, having only released two singles. (For a condensed illustration of "straight" vs."Spike" styles, listen to the brief trombone solo in the intro to "That Old Black Magic."

He starts out with a tone and technique sounding like the great Tommy Dorsey, but in just a few bars quickly degenerates into the "slowly dying engine of a WWI biplane" tone more commonly heard in the band's recordings.)

In the modern day, he is perhaps best known for performing a Breakaway Pop Hit cover of the song "Der Fuehrer's Face," featured in the Disney Wartime Cartoon of the same name, though the song was originally written by Oliver Wallace.

Another famous routine is "William Tell Overture", featuring a horse race commentary by fellow comedian Doodles Weaver (Sigourney's uncle) stacked with jokes about the horses' names and ending in a surprise win for The Alleged Steed Feetlebaum.

And around Christmas, you've probably heard "All I Want For Christmas Is My Two Front Teeth".

Spike, over his long career, did live performances, radio, a bit of film work, and appeared on TV for several years. A live performance was a sight to behold, with Spike both conducting and also handling many of the oddball percussion instruments, madly racing around the stage in his trademark loud-patterned Zoot Suit (which he continued to wear long after the Zoot had passed its 15 minutes of fashion fame), often vigorously chewing a wad of bubble gum (Spike was a chain smoker who found masticating the gum was the only thing that helped get him through performances when smoking would have been inconvenient and awkward.)

Spike Milligan of The Goon Show lifted his nickname as a homage to Jones.

Not to be confused with the more contemporary film director Spike Jonze.

Spike Jones and his City Slickers provide examples of: