At the Opera Tonight 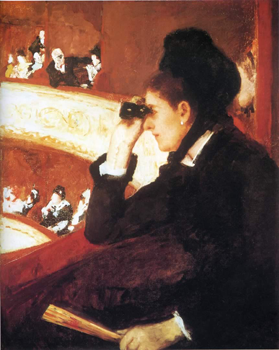 Going to see and be seen.
"You don't know how refreshing this is. To meet someone who doesn't just come to the theater, but who gives over to it. That crowd in there, they only come because it's fashionable."
— Sir Trevor Aimsley, Frasier
Advertisement:

Basically where characters are attending an Opera, concert, or other Theater performance to take in some culture. Yet this is mainly about what the characters do there. What happens on stage is usually irrelevant, even though we do usually get to see a little of the opera or concert. If what is being performed matters at all, it's to give the attending characters something to emotionally relate to. If the story features characters involved with the actual production in an important way (such as the main character finally getting the big part he/she dreamed about), it's not this trope.

In some stories the real show is the people attending. They come in their finest suits, dresses, jewels, furs, and opera-length High-Class Gloves, often tailored to fit the current styles... and by current styles we mean an unwritten Dress Code that sorts out the Old Money patrons from the Nouveau Riche. As a consequence the patrons may not even pay attention to most of the show itself (which was the case in Real Life until about Richard Wagner's day) so they can talk and gossip.

In some stories this is just to show one or more characters trying to be cultured, while other characters are bored to tears. When Men Are Uncultured, this is an opportunity to demonstrate masculinity by swearing off the flowery show to which their wives have taken them. Conversely, the more worldly man can take his less sophisticated love interest to the opera to impress and cultivate her. Sure enough, she is wowed by the glamorous surroundings and mesmerized by the performance, while he observes her contently.