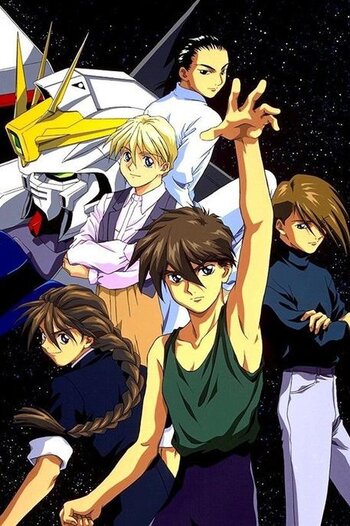 They know what to do!
"With high expectations, human beings leave Earth to begin a new life in space colonies. However, the United Earth Sphere Alliance gains great military power, and soon seizes control of one colony after another in the name of justice and peace..."
"The year is After Colony 195..."
Advertisement:

Shin Kidou Senki Gundam Wing (lit. "New Mobile Report Gundam Wing"), or simply Gundam Wing, is one of the more (in)famous of the Gundam Alternate Universes. Aired in Japan in 1995, this 49-episode series was brought to the United States (and eventually worldwide) in 2000 on Toonami, which helped push Gundam into the Western mainstream.

In the year After Colony 195, the United Earth Sphere Alliance rules the Earth Sphere (the Earth, the Moon, and all associated space colonies) with an iron fist by way of Humongous Mecha known as mobile suits. Rebellious elements within the Space Colonies decide to fight back by sending five powerful mobile suits — Gundams — down to Earth so they can wreak havoc on the military forces.

Relena Darlian, the teenage daughter of an important colonial diplomat, accidentally discovers the identity of a Gundam pilot who was shot down during his entry to Earth: a teenage boy named Heero Yuy. Because she can positively identify him, Heero tracks Relena down and swears to kill her (something he never quite gets around to doing). From there, Heero and the other four Gundam pilots find themselves having to blast their way through the various groups in power behind the UESA (and eventually their own force) while Relena fights in her own way to bring about peace between the Earth and the colonies amidst various political power shifts caused by the Gundam rebellion.

The anime was a huge success, resulting in several more projects in that universe. The most notable was Endless Waltz. Taking place a year after the end of the series, a new rebellion is bankrolled by Dekim Barton, the original mastermind of Operation Meteor, with his adolescent granddaughter Mariemaia Khushrenada as the figurehead. They are using the peace and demilitarization after the last war to try and conquer the Earth. Unfortunately, the Gundam pilots had sent their Gundams into the sun weeks ago and must now try and get them back, while another pilot has sided with Mariemaia completely. Originally released as a 3-part OVA, it was later re-released as an extended movie with new footage.

Numerous other stories were told set in the After Colony timeline, mostly manga.

The series was brought to Western shores via Toonami in 2000 and became a smash hit right from the start. Cartoon Network aired two versions of the show during its initial run: a slightly-Bowdlerised version that omitted some violence and dialogue, and the uncut version shown during the "Midnight Run" (which was likely the inspiration for the Adult Swim programming block introduced just a year later). The combined success of this series, Sailor Moon, and Dragon Ball Z (which ran back-to-back-to-back with Gundam Wing for a long damn while) is often credited as the source of the major Anime boom in the 2000s.

With a cast full of attractive male characters and the Gundams themselves mixing practical military designs with aesthetic appeal, Gundam Wing is often credited/blamed for introducing female fans in the West to the genre of Mecha Shows.note In Japan, female fans of the mecha genre got started early with shows like Brave Raideen and the original Mobile Suit Gundam. Even Yoshiyuki Tomino, creator of both shows, acknowledged

Example of:
I'll Kill You!