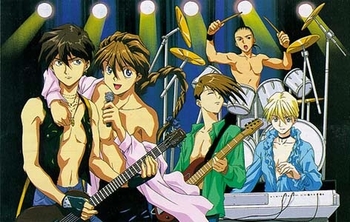 Narrator: And don't forget the Yaoi Fangirl bait. Wait, what yaoi fangi... ooooh wait, there it is, I see it.
— Gundam: A Summary

Anime and Manga characters acting "just friendly" with one another? Ha! You wish.

Note: If a series has a Main page, create a new subpage for Ho Yay rather than listing here.