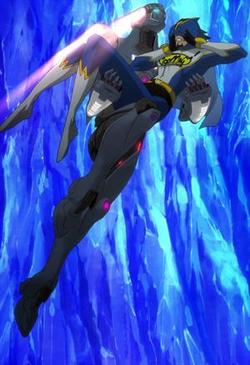 And this was just the beginning... Quite literally. We would like to remind you that yes, this was their first meeting.

There's a reason this show managed to garner a sizable fanbase amidst the LGBT crowd.

open/close all folders
Ho Yay
An astonishing number of interactions between Kotetsu and Barnaby involves this. They meet in Episode 1, and by Episode 2 they're quarrelling like an old married couple.
Les Yay
There's not much Les Yay in the show itself, but the fifth drama CD hints at Pao-Lin's crush on Karina.

Pao-Lin: I don't know why, but my heart was pounding like never before.
Agnes: That look on your face... that's "amour".
Pao-Lin: Ms. Agnes, you were there!?
Agnes: You guys looked so close, I didn't want to spoil the scene by calling out.
Pao-Lin: Um, just now...you said "amour"...
Agnes: Don't worry so much. You were looking at Blue Rose so intently. Even if she isn't a boy, you can still fall for her, you know.