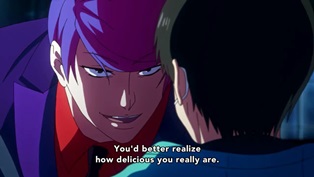 Tokyo Ghoul already has a fair amount of Ho Yay, the anime/novels/games only add more.

Advertisement:
open/close all folders
Kaneki/Tsukiyama
So much between the All-Loving Hero and the Camp Gay gourmet. Or at least on Tsukiyama's side. He is fascinated with him because Kaneki is a one eyed ghoul and wants to eat him, much to Kaneki's chagrin. However, through Character Development Kaneki and Tsukiyama develop a much healthier relationship where neither is trying to kill/eat the other.
Kaneki/Hide
Kaneki's relationship with Hide was one of the most important things in the beginning of the manga, as he was his Only Friend and Living Emotional Crutch before he became a ghoul.something about a rumble and Hide being afraid of what will come out?

Kaneki: screams about a zombie
Hide: 1,2,3! kicks the shit out of it

Haise/Arima
The relationship between CCG's Reaper and his protégé is... complicated, to say the least.
Kaneki/Sasaki and Others
Advertisement:
Other/Other
The girls
CCG Members
Quinx Squad