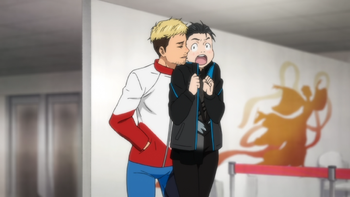 There are two things you need to learn about Yuri!!! on Ice. One: it doesn't know the meaning of subtlety. And two: the amount of homoerotic subtext in this series alone exceeds all the subtext that can be found in every other sports anime — combined.

For those looking for Victor/Yuri, check the Ship Tease page.

For the most part, it seems to be one-sided. Nevertheless, if you look closely enough, the anime throws a lot of hints that what Yurio feels towards Yuri may not be hatred, but actually admiration and possibly even more. And if we look at their relationship through that spectrum...

It's revealed that Yurio and Otabek knew each other from five years prior to the series when they were at a training camp together.