Anime / When Marnie Was There 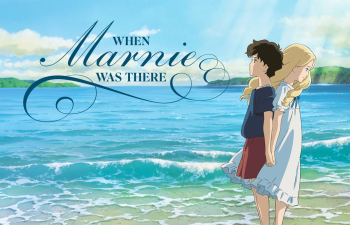 When Marnie Was There, (in Japanese Omoide no Marnie or "Marnie of My Memories") is the 22nd anime film produced by Studio Ghibli, released in 2014. It was directed by Hiromasa Yonebayashi and written by him in collaboration Keiko Niwa and Masashi Ando, and based on the classic 1967 children's novel When Marnie Was There by Joan G. Robinson.

The film (and novel) tell the story of Anna (Sara Takatsuki), an introverted, alienated and severely asthmatic twelve-year-old girl from Sapporo, who only finds solace in her talent for drawing. To aid her health, Anna's guardian sends her to stay with relatives living in a rural seaside part of Japan (Norfolk, England in the book), where Anna soon becomes fascinated by a large Western-style manor looming near the marsh next to the village she stays in. The first time she goes there she finds it abandoned and run-down but on her second visit, the house is suddenly full of life and light. More importantly, it appears to be home to a blonde girl named Marnie (Kasumi Arimura), who looks exactly like the girl Anna had been seeing in her dreams.

The girls feel an immediate connection, which grows ever deeper each time they meet. Still, Marnie and the manor she is living in remain a mystery. Why does the place look abandoned when Marnie is not around? What is Marnie's true identity? And what are her ties to Anna?

In typical Studio Ghibli style, with gorgeous animation and music, the movie gradually unfolds the meaning of Anna and Marnie's encounters, with Anna meeting several other important people along the way who all help her on her journey to find herself.

The film became Yonebayashi and producer Yoshiaki Nishimura's final film for Ghibli before its restructuring caused the duo to leave and form Studio Ponoc. It is also the final film to feature longtime key animator Makiko Futaki, who died four years after the film's release.

When Marnie Was There provides examples of: