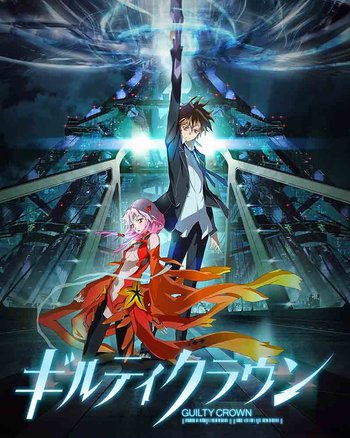 A young man involving in change...
"The right to use my friend as a weapon.
That is the sinful crown
I shall adorn.
I accept this 'guilt.'"
Advertisement:

In the year 2029, the mysterious Apocalypse Virus spreads and plunges all of Japan into a state of emergency in a period of chaos known as Lost Christmas. Eventually, an international organization known as the GHQ intervenes with martial law and restores order to Japan at the expense of its independence.

Ten years later in 2039, Shu Ouma, an asocial 17-year-old student at Tennouzu High School who often keeps to himself in school, meets Inori Yuzuriha, lead singer for Egoist, when visiting one of his favorite places on his way home from school. Shu is a big fan of Inori, who has taken the internet world by storm, and is surprised to meet her in person. However, he soon discovers the other side of her: Inori is a member of the Funeral Parlor, a resistance group that aims to liberate Japan from the clutches of the GHQ.

From that point on, Shu takes part in the actions of Funeral Parlor and the "king's mark" appears on his right hand. This mark bestows upon him the "power of kings," the ability to reach inside someone else's body and extract and materialize a weapon, or "Void," from it.

The first twelve episodes are more or less roughly comparable to the likes of Neon Genesis Evangelion. When Loop 7, the area where most of the events take place, gets locked down, comparisons to Infinite Ryvius and Devil Survivor start to become common for a while and, in the end, the series goes right back to Eva territory for its conclusion.

Directed by Tetsuro Araki, with a story written by Hiroyuki Yoshino (with the help of Ichiro Okouchi), music by Hiroyuki Sawano, and character designs by redjuice and further music composed by Ryo, both of them members of the popular J-pop band Supercell, Guilty Crown is a work by Production I.G that aired on the noitaminA block. Funimation simulcast the series, with a DVD and Blu-Ray release in August 2013.

A manga adaptation based on only the first 12 episodes with elements of the later half is published by Square Enix's Gangan Comics in their Monthly Shonen Gangan label (November 2011 - December 2013), and a nitro+-produced PC game spinoff titled Guilty Crown: Lost Christmas, with a story written by Jin Haganeya, who is also part of the show's writing team, and released in 2012. There is also another novel written in April 2012 called, Guilty Crown: Princess of Deadpool, alongside a second manga from July 2012 - May 2014 focusing on Ayase Shinomiya called, Guilty Crown: Dancing Endlaves.

Around 2019, a mobile game based on the game is released in China.

No relation to Guilty Gear. Except that both series have an awesome soundtrack.

Please move any character tropes to the Guilty Crown character page and any tropes from specific episodes to the Recap page.

open/close all folders
Tropes # to C
Tropes D to G
Tropes H to L
Tropes M to O
Tropes P to S
Tropes T to Z
“I have decided. I will get my hands as dirty as I have to. I shall gather your sins and assume their weight. Your strengths, your weaknesses, your light, your darkness. I'll let them all sink into my body... I'll bear the burden. Until the end. For this is my guilty crown.”
Feedback