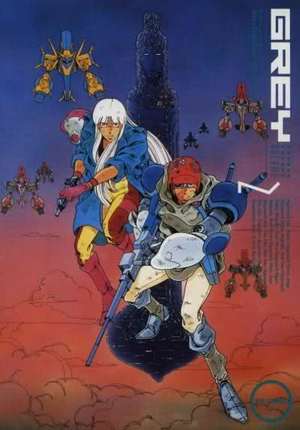 Nova (Left), Grey (Right), and the Resistance base Nagoshi(back).
Advertisement:

Grey is a Shōnen Manga created by Yoshihisa Tagami and published by Tokuma Shoten in Monthly Shōnen Captain magazine (and Viz Media in North America). Originally running between 1985-1987 culminating in three volumes.

The Manga was also adapted into an Animated Film, Grey: Digital Target, on December 13th, 1986. It was produced by Magic Bus and Tokuma Japan Corp. under the direction of Satoshi Dezaki with a total runtime of 73 minutes. (Viz Media also released a translation of Digital Target.)

Both the Manga and animated film tell the story of a post-apocalyptic world covered in wastelands and only dotted with the occasional small town. Each town is supervised by a "Little Mama" computer, a node connected to the world governing super-computer called "Big Mama". The underprivileged in each town, known as "People", live in the slums, work for a pittance in factories, and are subject to both attack from other towns and abuse from the "Troopers" — the town military. Anyone can apply to become one of the privileged "Troopers", join the army and fight the other Towns in a perpetual war. The Troopers trade a low survival rate for being able to afford the finer things in life — and fight in the hope that if they live long enough, they can become "Citizens" — inhabitants of the legendary capital city of the world.

The story follows Grey, a successful combatant who joined the army after the death of his girlfriend, Lips, during one such war. Even though he originally despised the Troopers and everything they stood for, Grey continues to fight and is continually seeking an answer for why Lips had to die. Grey has become legendary among the Troopers of his town, both for his success rate in battle and the tendency to return as the Sole Survivor of any squad he's sent out with. They call him "Grey Death"...