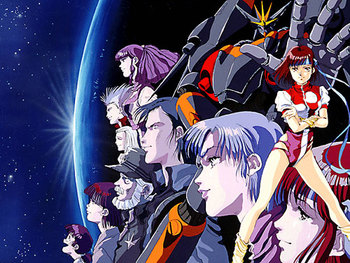 Saving the Earth with hard work and guts!
"A miracle will happen — we'll make it happen!"
—Noriko Takaya
Advertisement:

GunBuster is a six-volume OVA from 1988 directed by Hideaki Anno. The series is what put Studio Gainax on the map, and is one of the most well known title among old school otaku. It's also considered somewhat of a spiritual predecessor to Neon Genesis Evangelion and Tengen Toppa Gurren Lagann, as it contains a lot of elements that would later be used in those shows.

Noriko's life becomes harder still when "Coach", who is also the sole survivor of the Luxion fleet (Noriko's father saved his life), sees something in Noriko that no one else does. Because of this, he selects her as Kazumi's partner to graduate early and participate in a secret project — over all the other students, and the objections of both Kazumi and Noriko. Days of bullying, several speeches, a couple of training montages, and one robot catfight later, Noriko and "big sister" are shipping out for advanced training in Earth's orbit. Here they find a rival, "genius" Soviet pilot Jung Freud, who starts by challenging Kazumi to a duel, then settles into a snippy sort of friendship.

The middle two show our heroines shipping out with the fleet, tapped to try out the new "Buster Machine" giant robot. If Noriko's angst and fear doesn't derail them first. Episode Five is Kazumi's turn to get put through the wringer. The final episode is elegiac and deeply angst-ridden (not that the previous episodes were a barrel of laughs). In fact, it's so serious that it was animated in black and white, on color film.