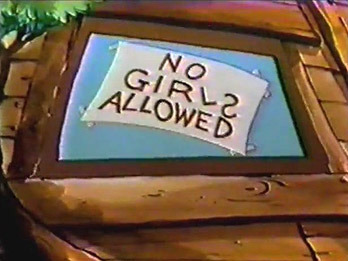 "The flames will make it look like you're going faster, and the backwards R is charming because we're children."
— JP, Craig of the Creek, "Creek Cart Racers"
Advertisement:

Showing that someone (usually a child) is of limited literacy by oɔɔasional letterƨ being rɘversed in their writing.

When the only reversed letter is R or N, this can make text look pseudo-Russian.

The Trope Namer is an entry in Roger Ebert's Bigger Little Movie Glossary, submitted by Andy Ihnatko, about the "Grafik Artz" techniques used to fake amateur drawing in movies.

Truth in Television, in Real Life children do often get letters mixed up. Vox

hypothesizes that this is potentially due to our brains not bothering too much with remembering left/right orientation since generally it's irrelevant in nature.

A subtrope of Stylistic Suck. May be combined with Xtreme Kool Letterz. See also The Backwards Я and The Illegible‎.