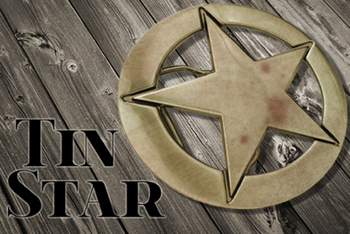 Saddle up, pardner! Tin Star is an independently produced Gamebook-style game by Allen Gies, previously known for his prior games, Marine Raider and Apex Patrol. It is hosted by Choice of Games' user submitted label Hosted Games.

After being convicted of murder and sentenced to hang, you are saved from the noose by Marshal Simon James. He's got an offer for you: take up his job as U.S. Marshal of Lander County, Nevada for a period of four years, or take six to the chest. Out in Nevada, you'll meet up with a colorful assortment of characters, fight bandits and Indians (or join them!), fight a bear, make strategic and moral decisions that will define your character, and maybe even find out what's really going on in Nevada, and what it all has to do with you.

Just be careful out there. None of the other Marshals in Lander County have lasted very long...

The first few chapters are available as a free demo. (Beware, it ends on a cliffhanger!)

Not to be confused with a similarly-named Rail Shooter for the SNES.