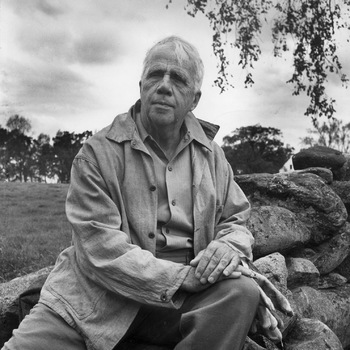 Robert Lee Frost (March 26, 1874 – January 29, 1963) was one of the most iconic and influential American poets of the 20th century. Americans probably know him best for "The Road Not Taken" or "Stopping by Woods on a Snowy Evening", both of which are commonly taught to students beginning in elementary school.

Frost was born in San Francisco but lived in New England for most of his life. His work focuses primarily on the joys of rural and rustic living, and uses colloquial language frequently. He's one of the most honored poets in American history, having received four Pulitzer Prizes in his lifetime. He was also Poet Laureate of the U.S. from 1958 to 1959, and famously recited his poem "The Gift Outright" at the inauguration of President John F. Kennedy in 1961.

An Oscar-winning documentary, Robert Frost: A Lover's Quarrel with the World, followed Frost around for a couple of lectures he gave not long before he died.