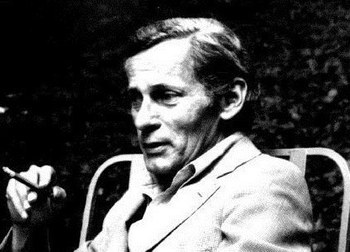 "How some of the writers I come across get through their books without dying of boredom is beyond me."
—From The Review of Contemporary Fiction interview, Summer 1982, Vol. 2.2
Advertisement:

Gaddis is widely considered as one of the earliest and most important American postmodern writers.

Novels written by Gaddis with their own pages here:

Tropes found in his work