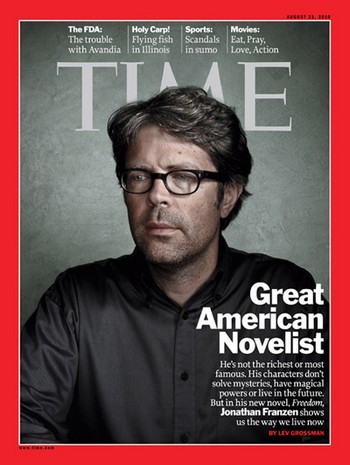 Jonathan Earl Franzen (born August 17, 1959) is a widely lauded author of American literary fiction who has written five novels. His third book, The Corrections, launched him into the stratosphere in terms of popularity, although more people may be familiar with Franzen's "feud" with Oprah than the actual novel. Regardless, The Corrections became a best seller, won the 2001 National Book Award for Fiction, was a finalist for the 2002 Pulitzer Prize in Fiction, and is considered to be the best book of the 2000s. His fourth novel, Freedom, was met with similar praise.

In addition to his novels, Franzen has published a collection of essays, How To Be Alone, a memoir, The Discomfort Zone, and, most recently, Farther Away, another essay collection. He has also published various short pieces, fiction and non-fiction, throughout his career, along with a translation of the German play Frühlings Erwachen, perhaps better known as Spring Awakening.

Franzen was a close friend of David Foster Wallace; he at times interprets/fills in the blanks on Wallace's work, which is at times divisive but is also at times impossible to ignore (being a confidant of Wallace, he is well-positioned to talk about Wallace's quasi-autobiographical short fiction).