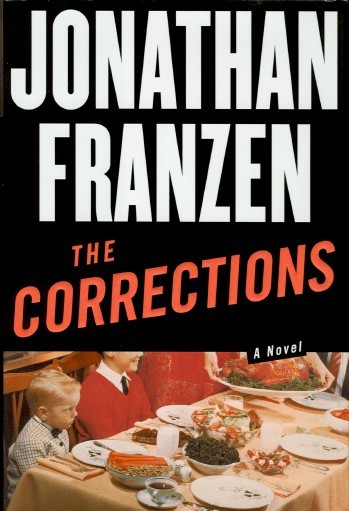 "If John Irving and Tom Wolfe stopped bickering about how to write the Great American Novel long enough to sit down and tap one out together, they'd probably end up with something a little like Jonathan Franzen's "The Corrections" — only not as good."
— Benjamin Svetki, Entertainment Weekly review

Enid Lambert, a mother and housewife for fifty years, wants to get her entire family together for one last, really nice Christmas together in their childhood home, the Midwest town of St. Jude. Together with her cold, introverted husband Alfred (who's falling deeper into Parkinson's disease), she begins a year-long-campaign to persuade her children to come visit, including Gary, a man whose paranoia and vicious denial of his crumbling mental health is only matched by his wife's passive-aggression; Denise, who approaches her relationship with two parts fatalism and one part well-meaning cluelessness; and Chip, a Casanova Wannabe whose life got turned upside down when he was fired for an affair with a 19-year-old student.

From Jonathan Franzen, The Corrections (2001) somehow manages the near impossible task of articulating the trouble of conflicting cultural movements in America without being a huge, pretentious bore. With black comedy, loads of people with awful personalities, and a good deal of attention paid to detail, The Corrections is definitely worth a look. Just make sure you're in a good mood when you do.

There has been various attempts to adapt this novel, either as a film or a television series (but the 2011 pilot has yet to picked up by anyone).